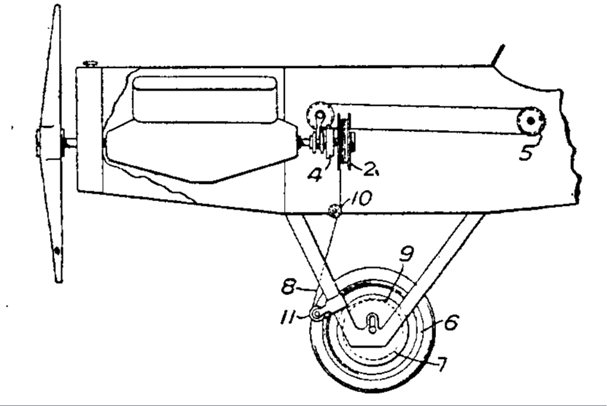 We have met many people through the years who independently invented the concept of an aircraft-powered wheel. I have joked that I am sure the Wright Brothers must have been frustrated that a machine designed to fly could be so hard to move around!  Here’s the earliest photograph we could find of a manual pushback:

We just know what those guys were thinking!

Note: Along the way, I found several pre-Wright Brothers patents on flying machines – some quite detailed, others quite ridiculous. I also encountered some vertical takeoff aircraft concepts from before 1910, predating eVTOL quite nicely as well.  Of course Leonardo da Vinci had one of these as well – with the same commercial viability!

Recently I saw an illustration from 1977 that really made me wonder:

Of course  e-taxi predates 1977, but by how much?  Thanks to all the scanned archival patent files, today it is quite easy to find that information.

Going back just a little bit to 1974, for example, one finds:

This invention is a self-contained aircraft taxiing system. By this invention aircraft can be made to move about on the ground without the assistance of any external power. This invention eliminates the need for an external force to pull, push, or otherwise move an airplane. This invention is further a means of reducing air pollution and reducing the amount of noise which is prevalent in the vicinity of today’s modern airports.

The list of benefits is one we could have written!

(12) Accordingly, it is an object of this invention to move aircraft on the ground without the use of any external power but rather through the use of a self-contained taxiing system.

(13) It is a further object of this invention to effect a fuel savings in an aircraft which is taxiing between a runway and the discharge center at an airport.

(14) It is a further object of this invention to provide a means of reducing the manpower necessary to move an aircraft about an airport.

(15) It is another object of this invention to eliminate the need for equipment external to the aircraft to move the aircraft about an airport.

(16) It is a still further object of this invention to reduce the air, smoke, and noise pollution which is prevalent around today’s airport facilities.

(17) It is another object of this invention to reduce the wear and tear on aircraft tires by effecting a spinning (“spin-up”) of the wheels while the aircraft is in the air and just prior to landing.

(18) It is a further object of this invention to drastically reduce and even eliminate, the “breakway” or taxi thrust which is needed to get today’s aircraft moving and sustain its movement about the airfield.

(19) It is yet another object of this invention to reduce the amount of spacing of aircraft on taxiways prior to ascent by reducing and even eliminating the breakaway and taxi thrust.

(20) It is a further object of this invention to effect a noise reduction and hearing damage reduction on and around airport facilities.

(21) It is a further object of this invention to extend the useful life of present airport facilities.

(22) It is yet another object of this invention to eliminate engine ingestion problems which occur on terminal ramps and taxiways.

(23) It is yet a further object of this invention to eliminate the need for wider taxiways for purposes of protecting aircraft jet engines from ingestion.

But it goes farther back than that!

In 1962, for example, a man named Henry Wiebe who worked for General Aeromation summarized the challenge quite well in his patent:

(3) Relative to the first part, the movement of multi-engined airplanes on the ground, particularly jet-engine propelled airplanes, has become a real and vexing problem, in that the use of jet-engines is not only very expensive but incurs many problems due to the great blast noises at disturbingly high frequencies, and the violent air disturbances caused by the jet engines. Because the propulsive efficiencies of jet engines are extremely low at ground movement speeds, further, because the overall gross weights of modern long range jet aircraft has increased enormously in the past decade, thereby greatly increasing the rolling resistance of the heavily loaded tires, which cause the jet engines to run as high as eighty percent full-open throttle-setting to start the taxi roll, thereby consuming very large quantities of jet fuel and producing fumes, smoke and tremendous noise.

(4) Many solutions have been proposed, such proposals fall into two categories; towing with a towing bar hitched to a very large and powerful tractor, but due to the limited clearance between the airplane fuselage and the ground and the great length of large airplanes, any traction vehicle which is massive enough to develop enough tractive effort must employ long tow bars which have proved impractical due to the great separation distance between drawbar and airplane’s landing gear tow-attachment points which reduces the vehicle’s effectiveness in heavy towing operations. The second group of proposed solutions to moving heavy aircraft on the ground falls into the category of propelling the main landing gears of the airplane by attaching to their wheels some device that will transfer torque to such wheels, so that these main landing gear wheels are made to act as tractor drive- wheels, thereby propelling the airplane. This has been called the wheel-mover principle. All of these methods have proved impractical, inasmuch as they require modifications which must be made upon the wheels; such modifications either weaken the wheel and thereby shorten its life, or when designed originally to take care of such modification, such wheels weigh more thereby adding dead weight to the airplane, both of which are engineering considerations of grave consequences in aircraft design.

(5) Another type of device which has proved impractical in the wheel-mover category is called the friction-drive which has driving-rollers pressed with great force against the periphery of the main landing gear tires, thereby imparting torque to such wheels and propelling the airplane.

(6) They have proved impractical for many reasons, inasmuch as insufficient torque is available to the wheel through this medium under many conditions. ‘The great pressure which must be placed upon the drive-rollers causes the tire to suffer internal breakage of its cords, rendering it unsafe for sustaining high roiling loads at takeoff gross weights and at impact and during the deceleration upon landing when large braking forces must be absorbed by the main landing gear tires. Wet runway or taxiways further reduce friction between friction drive-rollers as do grease or other foreign matter preventing proper torque transmission from drive-rollers to the main landing gear tires.

In 1962 there was already quite a lot of history! How much? I jumped back from there to try to find the origin of the idea of an onboard taxi system.

Going back to this 1929 patent we see it refers to “The driving of the landing wheels is also of utility in the transporting of the plane to and from the place of flight by taxiing.”

A 1923 patent was even more specific!

Davies, J. A. Dec. 8, 1922. Starting. – To facilitate the starting of an aeroplane the land-wheels are rotated by a cable or cables wound onto a drum adapted to be clutched to the engine-shaft. A cable 8 passing over guide pulleys 10 11 has a looped end engaging a projection 9 on a drum 7 mounted on the axle of the land wheels 6, the other end of the cable being secured to a drum 2 adapted to be clutched to the engine shaft by a clutch member 4 operated from a handle 5. When the cable is completely unwound from the drum 7 the looped end slips off the projection 9. A brake may be provided to prevent rotation of the drum 2 when it is declutched from the engine-shaft. There may be more than one cable 8 wound upon corresponding drums mounted upon the land-wheels or their axle

Relates to aeroplanes with folding wings and with means for driving the landing-wheels when on the ground, and consists in providing two motors,one for the propeller and one for the driving- wheels. … The motor is adapted to drive the landing wheels r through a gears, universal joint m, cardan shaft l, differential gear o, cross-shafts with chain sprockets at the ends, and chains to sprockets on the wheels.

Certainly 1919 is pretty early days for aerospace. But the idea of an onboard drive was indeed first patented well before then!

The shape of the flying-machine is well ‘adapted for applying propulsion to the ground-wheels, for example by-.means-of crossed belt. During flight : the belt can be shifted on.to an idle pulley. By direct propulsion of the ground- wheels in this manner the attainment of the velocity requisite for ascent is facilitated.

See what he is doing here – not just onboard taxi, but even takeoff assist!

But first prize for the earliest onboard taxi drive comes from the French – this concept from Henri Liuriette (patent FR12057E) dates from 1907!

All of this history shows that people have, for quite a long time, recognized the value of being able to do exactly what WheelTug is doing!  It is also why we carefully protect our intellectual property, including more than 130 patents worldwide.

As we have said – and as history has shown – making e-taxi actually work is quite hard – it certainly keeps us busy.

Thanks for following along as we take e-taxi off the printed page and onto the apron!